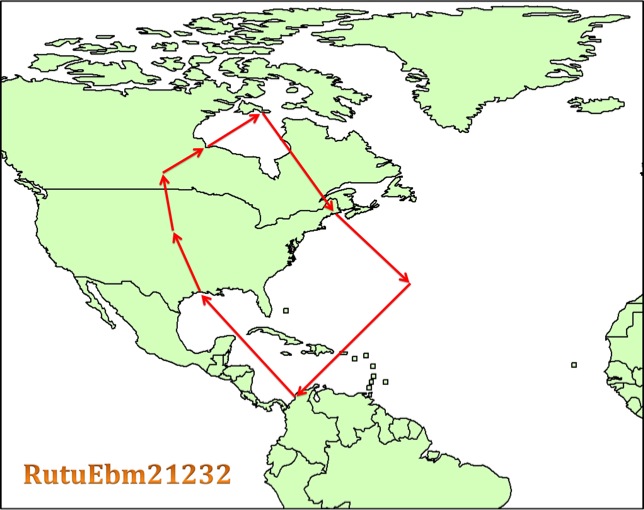 RutuEbm21232: Elliptical migration Here is shown a change to the Midwest flyway. Do all "Westward Winterers" use the Midwest flyway? Why the eastward loop over the Atlantic Ocean? With more recoveries we hope to answer these questions.

These maps were donated by researchers using various analysis methods. The project name, description, and principal contact information are listed by Species. For methods information refer to their published works in the bibliography. Each map title is coded to identify Species, Project, Bird Identification and Years covered by the track. (example: PagpKwa2072_1213 is PacificGoldenPloverKwajaleinBird#2072_2012to2013). If you wish more information about the maps or additional tracks the

PagpKwa14597: Migration Variant: This Kwajalein migration cycle changes to include a short Chukotka stop of 1 to 4 days northbound, and a diversion at the end of the southbound migration at Enewetak Atoll of duration 17days. Flight weather southbound does not explain this diversion. Is it a navigation error? Why return to Kwajalein? Why not stay at Enewetak? 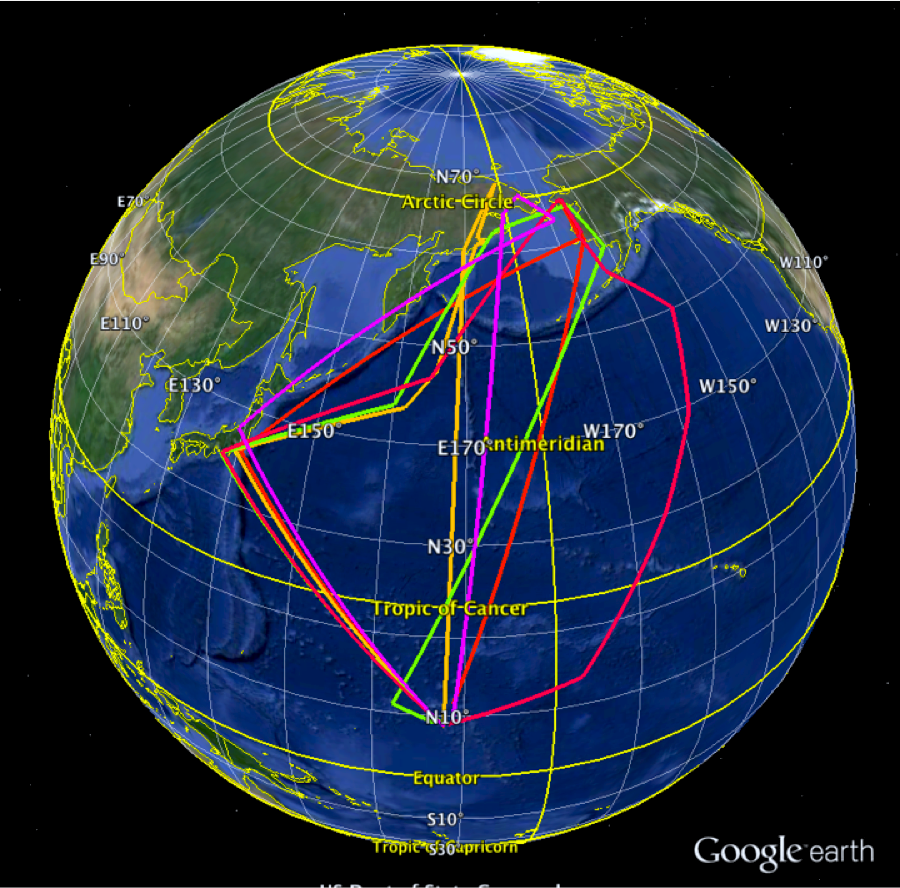 In a short while we were all aware that the first tests on shorebirds were in fact underway, on godwits[3] and red-shanks[4]. Now any researcher who could reliably retrap their target bird could learn in one season what previously took years of study, expeditions to remote places, and cartloads of money. Geolocators can reveal not only locations, but also flight paths, weather/flight interactions, flight speeds, day/night flight patterns, incubation patterns, movements among wintering grounds, new stopover sites, layover time at different stopovers, time spent wandering, and if that's not enough, whether birds frequent open or brushy habitat! In conjunction wit

h wet/dry sensors[5], a picture emerges of time spent foraging, timing of departures and arrivals, direct flights and coastal hopping. Even reactions to capture may be revealed! If many geolocators from the same group are retrieved one can learn how varied these behaviors are among the individuals in the community. How many activities and places do they all share? Did they all depart simultaneously? Take the same route? The information can validate model results (e.g. checking probabilities of detection at stopover sites in a survival model), and guide feather isotope analyses (where the feather grew becomes known), and even describe what the prevalent weather at the site might be. In short, what's to be learned is nothing short of amazing, and at a most reasonable cost[6].

However, one must be able to reliably retrap the same bird, or one risks wasting all effort and needlessly hurting birds. The first step should always be a flagging study to see how faithful the birds are to the trapping site, and to refine trapping methods. In future, when a remote reading capability is developed, just sneaking a receiver near the bird to read the data may be enough. Until then, the species and deployment sites will be limited. A general discussion on designing geolocator studies with waders is found in the Wader Study Group Bulletin (Clark, et al. 2010, issue 117-3). For very good scientific information regarding geolocation principals, methods, and photos of deployments[7] refer to the BAS[8] Geolocator Manual[9] by James Fox. The Wader Study Group is well schooled in habits and habitat of waders, trapping methods and resighting, and in being practical, so the Wader Study Group is perfectly suited for geolocator use. Waders, by virtue of their open habitat and shoreline preference, do indeed produce almost perfect light signals on the ground and in flight (compared, for example, to thrushes), and provide excellent subjects for individual and group studies.

On this page we will publish a series of short articles to illuminate geolocator details and experiences of researchers. We hope these documents will be a great resource for you, with advice for you on attachment designs, materials testing, known dangers to birds, calibration, trapping, test aviaries, information to record, weather sources, using software, interpretation, refining locations, wet/dry sensor use, arctic signals, and lots more. The first articles, Basic Geolocation and Calibration, will deal with the very basic concepts, and intend to introduce the nomenclature in a way that researchers from many countries and languages will find useful. Readers should be aware that there are advanced methods of analysis which are beyond the current scope of the series. Keep checking this site for updates and new content.   [1] New York Times, Friday, 13 February, 2009 [2] Science, 13 February, 2009, Tracking Long-Distance Songbird Migration by Using Geolocators, Bridget Stutchbury, et.al. of York University, Toronto, Canada. [3] Spring 2008, Jesse Conklin & Phil Battley, ref. Wader Study Group Bulletin #117(1) 2010 [4] Spring 2008, Raymond Klaassen and Peter Olsson, Lund University, Netherlands [5] This sensor is included in the MK10 and some other BAS geolocators. [6] Latest pricing about $200 per geolocator plus accessories. [7] as well as analysis details and instructions for use of Bastrak. [8] BAS, British Antarctic Survey, www.birdtracker.co.uk [9] www.antarctica.ac.uk/engineering/geo_downloads/Geolocator_manual_v8.pdf

Around the globe a "eureka" moment happened in 2009, when the New York Times[1] reported the success of Prof. Bridget Stuchbury[2] in Canada. Her successful deployment of lighter-than-ever geolocators on purple martins broadcast that finally there was an instrument small enough for waders. In a short while we were all aware that the first tests on shorebirds were in fact underway, on godwits[3] and red-shanks[4]. Now any researcher who could reliably retrap their target bird could learn in one
Geolocators are an increasingly popular technology for studying the movements of individual birds. The aims of this new project are twofold: Read more about geolocators in this Perspective article that was published in April 2016 in Wader Study. Watch this space as this project develops...

Geolocators are an increasingly popular technology for studying the movements of individual birds. END_OF_DOCUMENT_TOKEN_TO_BE_REPLACED