You can imagine a researcher muttering this phrase while peering through a spotting scope and trying to find a rare Spoon-billed Sandpiper Calidris pygmaea amid a large flock of nearly identical shorebirds. The distinctive spoon-shaped bill is often hidden from view making the bird especially hard to find. Even after a glimpse of the iconic bill, the researcher must watch until both legs can be seen well enough to determine if the bird has a leg flag. This often takes a while, and yet time is limited, because the survey must be completed while the tide is high. As the tide falls, the birds will spread out onto mudflats that stretch 50 km out to sea. The researcher cannot follow. Surveys are restricted to the upper mudflats because if humans venture out too far, they are at risk of drowning!

In this issue of Wader Study, Chang and colleagues explain why they conduct research like this; why they have banded together from across the globe to count Spoon-billed Sandpipers in Tiaozini, China. They report how field data, collected over two consecutive years, was combined with sophisticated statistical models to produce a reliable estimate of the number of Spoon-billed Sandpipers using this important coastal region1.

Spoon-billed sandpipers at Tiaozini are mixed in with other much more numerous shorebird species. (photo: Guy Anderson/RSPB).

Spoon-billed Sandpipers truly are like needles in a haystack. The world population is only about 700 individuals and they are one of the world’s most threatened migratory bird species. On their way between breeding sites in the Chukotka region of Russia and wintering sites in south-east Asia, the birds rely on a small number of staging areas around the Yellow Sea.

Spoon-billed Sandpipers were first recorded at Tiaozini and other sites within the Dongtai-Rudong mudflats of Jiangsu Province in 2008. They need these sites to rest and moult during fall migration. Establishing a reliable estimate of the number of Spoon-billed Sandpipers using these sites is vital because of the perilous conservation status of the species and because the mudflat habitat in the Yellow Sea as a whole is itself threatened. Finding this estimate, and putting it into the context of the wider world population, is what Chang and colleagues set out to do.

They conducted field surveys on the mudflats at Tiaozini from 2 – 10 October 2017 and 5 – 15 September 2018. As described above, the first step was finding the birds and the second was identifying individuals. How does one identify an individual Spoon-billed Sandpiper? The best way was to make use of plastic leg flags with unique engravings. Most of these flags had been applied to adults and chicks on the breeding grounds in Russia as part previous studies. The researchers considered birds with such flags as “individually marked”. 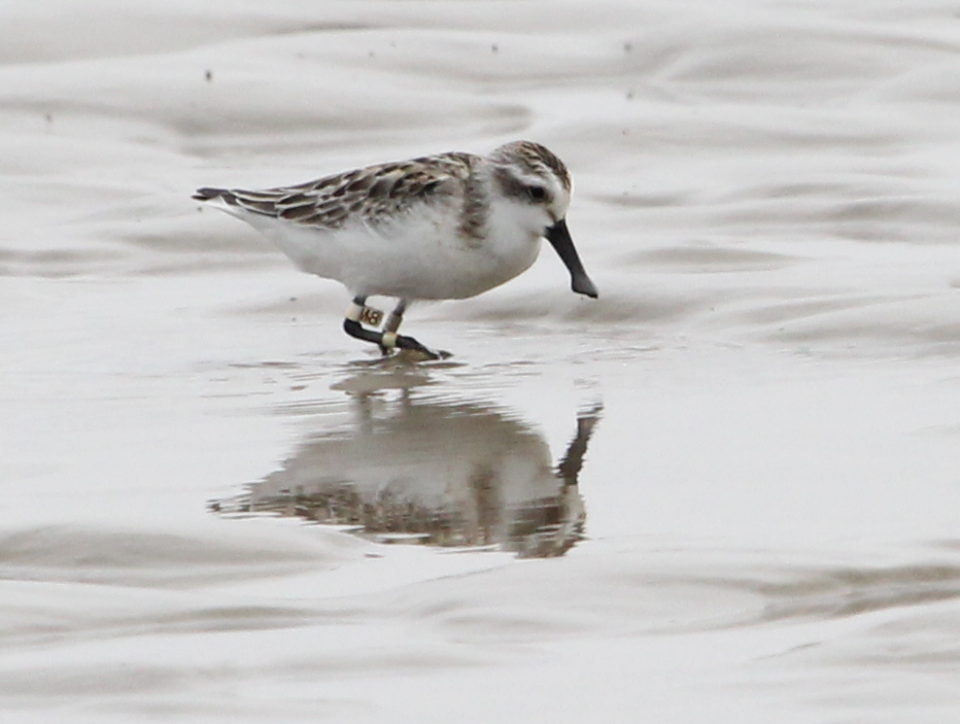 Juvenile spoon-billed sandpipers are rare at Tiaozini in autumn (over 95% of birds are moulting adults). This individual was leg-flagged as a chick on the breeding grounds in Russia. (photo: Guy Anderson/RSPB).

The researchers used closed population capture-recapture models which assume no arrivals, departures, or deaths of birds at the study site during the survey periods. This is reasonable because the birds were moulting their primary wing feathers during the surveys and were thus unlikely to be able to fly large distances. Furthermore, the survey periods were very short (7 days for 2017 and 9 days for 2018) and, although some deaths could occur, the number would be low – only 0.5% to 0.7% of adults.

The combination of field data and statistical modelling produced similar estimates (high repeatability) of the number birds on the mudflats within the Tiaozini study area over the two years. The estimates were 220 birds in 2017 and 224 birds in 2018. Because there was no evidence of population change between the years, the researchers averaged the two values for a best estimate of 222 birds (95% confidence interval 196–258).

Why are these mudflats so important to Spoon-billed Sandpipers? The researchers speculate that a high tidal range, a large area of mudflat available during the tidal cycle and a thin layer of fine mud on top of firmer sand may be important to foraging birds. The site may also be a refuge for birds displaced from other areas where the habitat has been degraded or lost.

Loss of habitat is a large part of the Spoon-billed Sandpiper’s problem. Mudflats in Tiaozini are threatened, as are mudflats all over the Yellow Sea3. Considerable areas of habitat have disappeared for land reclamation projects, wind and solar power generation farms, aquaculture ponds and rice fields. Where habitat remains, it is being degraded by the invasion of Smooth Cordgrass Spartina alterniflora which makes mudflats unsuitable for most shorebird species.

Mudflats at Tiaozini from the sea wall constructed to create aquaculture ponds and ricefields. Further land claim has ceased, but clumps of Spartina are colonising the remaining flats and may render the site unsuitable for most shorebirds in a few years if not controlled. (photo: Guy Anderson/RSPB).

The mudflats of Tiaozini are clearly important for about 40% of adult Spoon-billed Sandpipers, but where might the others be? The researchers have found birds elsewhere in Jiangsu Province and, though these sites have not yet been rigorously surveyed, they might contain another 20% of the adult population. Farther afield, two satellite-tagged adults were tracked to the Democratic People’s Republic of Korea where they spent the 2018 moulting season4. There remain many sites in the Yellow Sea that need to be surveyed systematically.

Spoon-billed Sandpipers are the needle in the haystack. There may be only 222 of them using the mudflats at Tiaozini, but they forage amongst millions of other birds that depend on the mudflats of the Yellow Sea5,6. Many of those shorebird species are also in decline – some perilously so5. Preserving habitat for a rare but charismatic species like the Spoon-billed Sandpiper saves habitat for other species as well. In this way, standing on a mudflat and searching for a metaphorical needle in a haystack may help save the haystack for all.

6. Cornell Lab of Ornithology. 2014. Filming Migratory Shorebirds on the Yellow Sea Accessed 17 Mar 2019 at: https://www.youtube.com/watch?v=F84v0CFN4Pw (for a short look at the Spoon-billed Sandpipers and other birds using the Yellow Sea)

We use cookies to ensure that we give you the best experience on our website. If you continue to use this site we will assume that you are happy with it.Ok